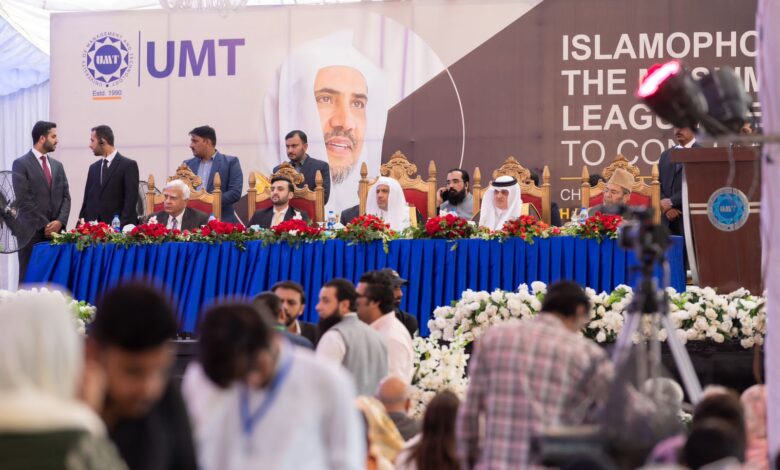 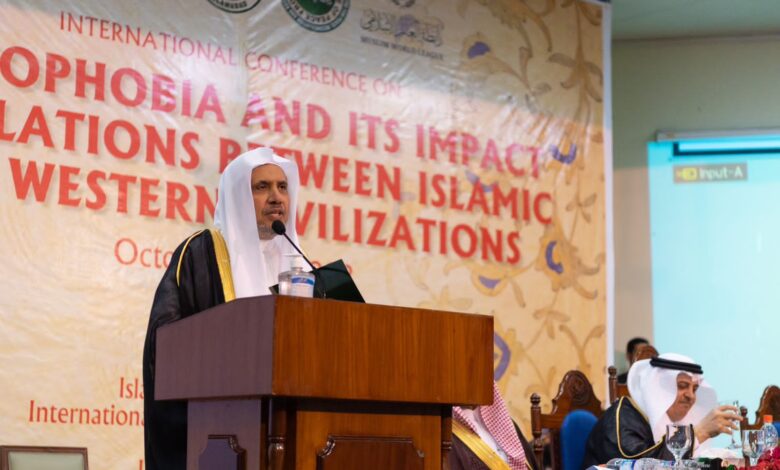 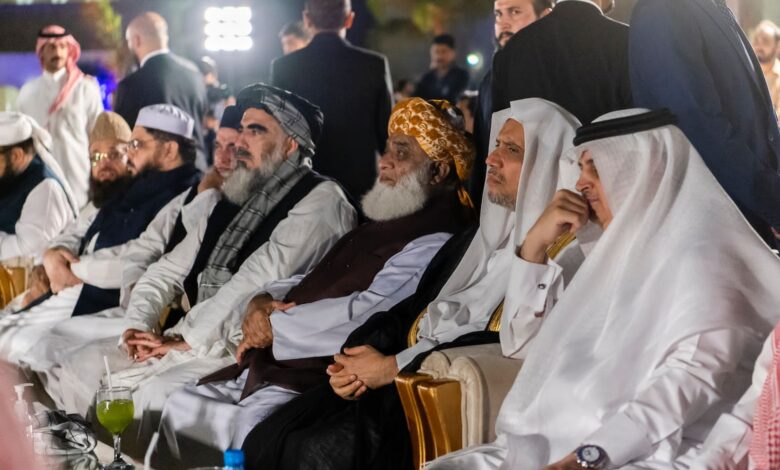 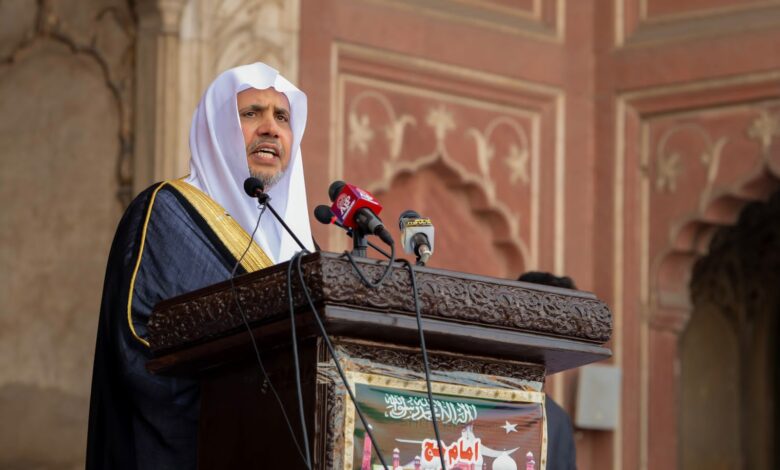 In honor of Secretary-General of the Muslim World League, Dr. Al-Issa, Pakistan wraps off its 1st international conference on “Islamophobia” and hosts the 1st meeting of religious leaders

The Secretary-General of the MWL is hosted by the head of the Association of Islamic Scholars and His Excellency the Federal Minister, Senator Talha Mahmoud

Dr. Al-Issa visits the Central Ahl al-Hadith Association as a guest of honor at one of the largest gatherings of Pakistani scholars

In honor of the Mlim World League, the activities of the Pakistan International Conference on Islamophobia and its Impact on Relations between Islamic and Western Civilizations, hosted by the International Islamic University, kicked off in the Pakistani capital, Islamabad. The two-day long activities, sessions and panel discussions of the conference were held with the participation of a group of senior scholars of the Islamic world, senior government officials, heads of academies, Islamic bodies, and international academic institutions.

His Excellency Secretary General of the Muslim World League and head of the Association of Muslim Scholars, Sheikh Dr. Muhammad bin Abdulkarim Al-Issa, was the guest of honor at the conference that also awarded him the “Religious Peace Prize” in recognition of his great contributions to promoting “civilizational communication, which made it possible to contain misinformation about the image of Islam.” 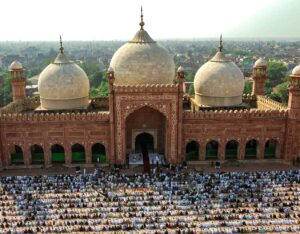 During his speech at the conference, His Excellency Dr. Al-Issa cast light on the emergence and steady growth of the phenomenon of Islamophobia, touching upon the most important causes, including the negative debates and the resulting exchange of abuse and misunderstanding. Dr. Al-Issa explained that the Muslim World League has contacted a number of religious leaders and think tanks around the world along with holding dialogues and panel discussions that lasted for years, in order to clarify the true image of our Islamic religion, and to correct some misconceptions.

Dr. Al-Issa added: “Our Islam guided us to follow the path of wisdom, to reconcile hearts and to treat people with kindness. We are the owners of a message that carries goodness and guidance for all, and we deal others politely as our religion ordered.”

His Excellency Minister of Religious Affairs and Interfaith Harmony, Mufti Abdul Shakour, delivered a speech in which he welcomed His Excellency Dr. Al-Issa and extended gratitude to him for his great efforts to combat the phenomenon of Islamophobia through the Muslim World League platform. Abdul Shakour stressed the support of Pakistani scholars for the sincere and arduous efforts of the Secretary-General of the MWL in this regard.

Abdulshakur confirmed that the phenomenon of Islamophobia needs more research, study and discussion; to probe its depths and reveal its causes and secretions. He also said that the educated youth are responsible for confronting this serious phenomenon through reasonable dialogue and calm discussion, and work should be done to remove the causes of the continuation of this phenomenon within the Islamic world.

In turn, Director-General of the Islamic Research Academy, Dr. Muhammad Zia-ul-Haq, described Islamophobia as a disease that threatens the cohesion of human societies, stressing the need to continue dialogue with non-Muslims; to show the truth of the message of Islam, and to dispel all the fallacies around it. Our true religion calls for co-existence and harmony, not division and fragmentation.

Then, President of the International Islamic University, Sheikh Dr. Masum Yassin, delivered a speech in which he described the visit of Dr. Al-Issa as great, considering that the Muslim World League conveys the true image of Islam to the whole world. Dr. Masum Yassin made clear that Muslims shoulder part of the responsibility for the emergence of Islamophobia due to their failure to highlight the true image of Islam. He pointed out that Muslims should follow the example of Dr. Al-Issa who travels to countries of the world to explain to them the truth of the message of Islam calling for tolerance and brotherhood among human beings. Dr. Masum Yassin rejected the presence of the term “Hatred of West” as Islam attracts hearts and does not push them, accepts not rejects, and it is impossible to explain the reality of Islam to someone we hate.

On the other hand, in an exceptional event witnessed by Pakistan for the first time in honor of the Secretary-General of the Muslim World League, the activities of a meeting of religious leaders kicked off in the Pakistani capital Islamabad as the meeting was hosted by the Council of Pakistani Scholars, to which religious leaders were invited. The event was also attended by senior scholars including heads of organizations, bodies and Pakistani religious groups.

Head of the Pakistan Scholars Council, Sheikh Hafez Muhammad Al-Tahir Al-Ashrafi, welcomed the visit of His Excellency Secretary-General of the Muslim World League and head of the Association of Muslim Scholars, Sheikh Dr. Muhammad bin Abdulkarim Al-Issa to Pakistan in whose honor this religious meeting, the first of its kind in Pakistan, is being held. He pointed out that 70% of Pakistan faces problems and difficulties, but this did not discourage the MWL from attending at such a hard time.

The Secretary-General of the Muslim World League began his opening speech by describing the meeting as an occasion for understanding, dialogue and building bridges.

His Excellency Secretary-General of the MWL and head of the Association of Muslim Scholars, Sheikh Dr. Muhammad Al-Issa, accepted Pakistan’s official invitation to deliver Friday sermon and lead worshippers as Imam in the most important and largest mosques in the cities he visits. He climbed up to the pulpit of King Faisal Mosque in Islamabad; the biggest in Pakistan and one of the largest mosques around the world, with a capacity of more than 300,000 worshipers. He delivered Friday sermon on moral values in Islam from the pulpit of the ancient Lahore Mosque, known as the “Badshahi” mosque accommodating more than one hundred thousand worshipers.

As part of the visit programs of His Excellency Secretary-General of the MWL Sheikh Dr. Muhammad Al-Issa to Pakistan, he met head of the Association of Islamic Scholars, the oldest Muslim Scholars Association in the Indian subcontinent, Sheikh Fazl-ur-Rahman. They discussed the role of scholars in raising the Islamic awareness in the face of extremist ideas. After the meeting, head of the Association of Muslim Scholars, Sheikh Fazlur Rahman, and Federal Minister, Senator Mr. Talha Mahmoud, held a grand reception in the presence of prominent Pakistani scholars and figures along with senior religious, governmental, parliamentary and diplomatic figures.

His Excellency Secretary-General of the MWL, Sheikh Dr. Muhammad Al-Issa, also visited the Central Ahl al-Hadith Association of Pakistan headquartered in Lahore, Punjab Province, where he was received by the head of the Association, Senator Sajid Mir, and its senior leaders. The Association held one of the largest gatherings of Pakistani scholars in its history to celebrate the presence of the Secretary-General of the Muslim World League, and the accompanying delegation as the meeting brought together Pakistan’s top scholars, religious and civil leaders.

During his visit to Punjab Province, Dr. Al-Issa visited Ashrafia Islamic University where president of the University, Sheikh Hafez Fadl Rahim Ashrafi, held a reception ceremony for the Secretary-General of the MWL and his accompanying delegation, in the presence of His Excellency the Governor of Punjab and the region’s scholars and dignitaries. The university also hosted a seminar, attended by academicians and students, in which Dr. Al-Issa presented a comprehensive explanation on the foundations of preserving the Islamic identity. The meeting also addressed the issue of formulating youth thought on the right approach.

Then Dr. Al-Issa visited University of Management and Technology, where he gave a lecture to the university’s employees and students, in which he addressed the efforts of the Muslim World League to address the phenomenon of Islamophobia, according to a comprehensive institutional vision that fully looks at this phenomenon. 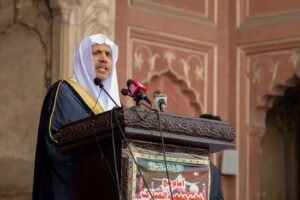 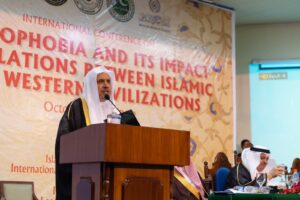 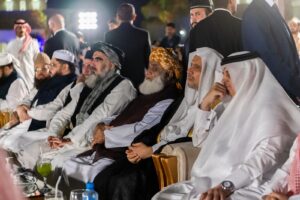 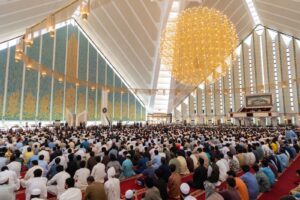 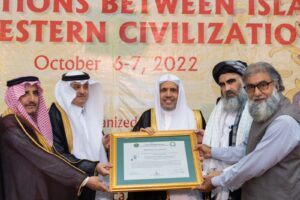 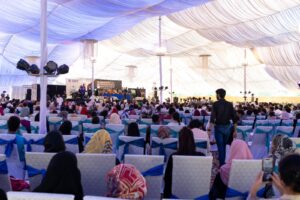 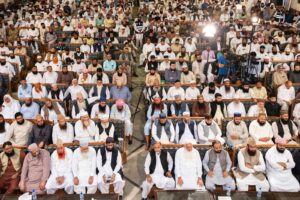 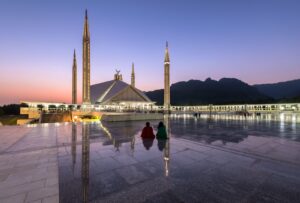 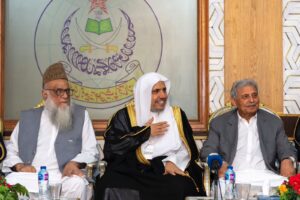 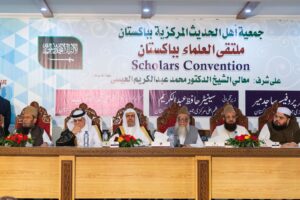 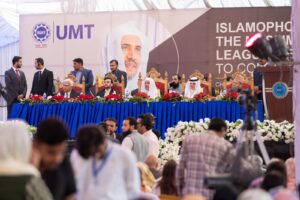 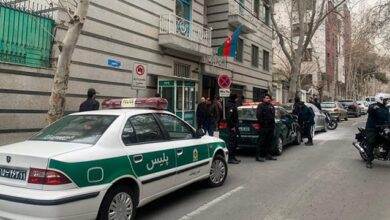 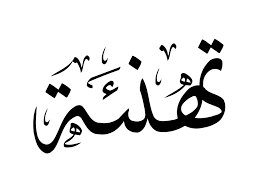